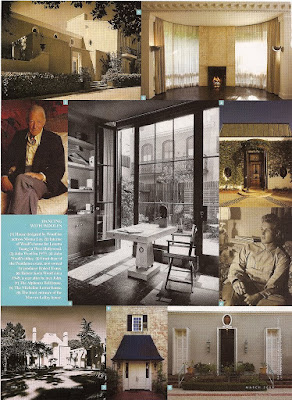 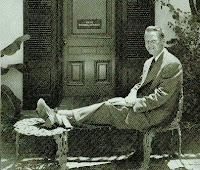 Vanity Fair's March 2009 issue has a very interesting and entertaining article titled "Glamour Begins At Home" by Matt Tyrnauer. It's about architect John Elgin Woolf(pictured right) and his partner,lover and later, adopted son, designer Robert Koch Woolf and how the two were responsible(or at least great contributors)for the creation of Hollywood Regency.
The article indicates that the pair established the new vocabulary which was originally created specifically for glamorous movie-star living in the 50's and 60's. Their Method? They synthesized 19th century French,Greek Revival and Modernist touches into a heady mixture of that was christened Hollywood Regency, which foreshadowed aspects of postmodernism. The clients list includes: Lillian Gish,Paul Lynde,Cary Grant,Fanny Brice, Barbara Stanwyck, Judy Garland,Bob Hope,Agnes Moorhead,Ricardo Montalban and many more. The architect John's work was even compared to the Petite Trianon.
A funny passage in the article talks about John's relationship with Katherine Hepburn regarding an argument between the two where Katherine wanted a fireplace and architect John aka Jack simply stated he hated the idea. Katherine was quoted as saying "Mr Woolf, I think your mother must have been a fireplace". It's a great read with a lot of Hollywood gossip. There is even mention of Movie star Loretta Lynn's mother Gladys Belzer being heralded as one of Hollywoods most premier designer at the time.

Here is a great flickr link with many photos of celebrity homes by Woolf.
Posted by Julio Muao at 10:32 PM

Oooo interesting, I will look at the flickr link for sure! When in college studying ID and Art Design we had a guest lecture speaker come to our college. I am forgetting his name but he was the designer for Richard Nixon and Bob Hope at the time. He was an interesting man to learn from!
Linda Q

I think your guest lecturer might have been Billy Haines, a fascinating guy for sure. Also gay and from Beverly Hills. Though Reagan cruelly banned research on AIDS, he had many gay friends. Reagan reversed himself on gay research when good friend Rock Hudson died of AIDS.

There are a few good books on Billy Haines. Check him out. You will be impressed.

Wow, I love the education I keep getting here! Haines, and now this? What romance and beauty. Thank you!