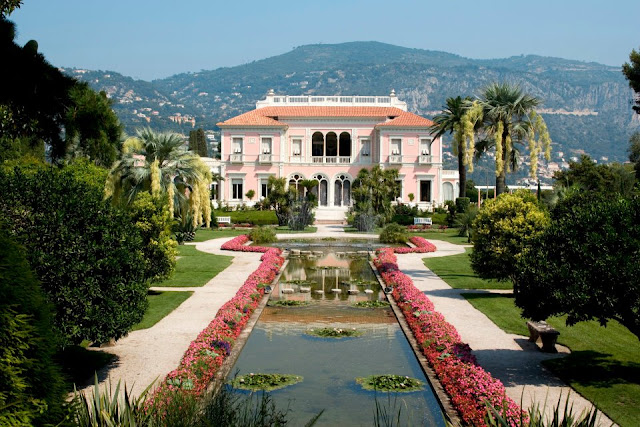 This magnificent seaside palace was built in between 1905 and 1915 for the Baroness Beatrice de Rothschild. The villa, named Villa Ephrussi de Rothschild, overlooks the Mediterranean. 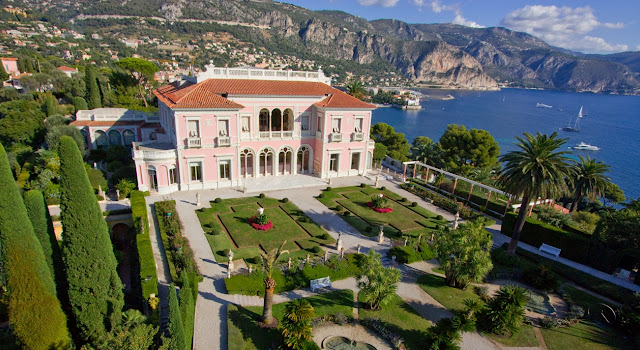 Ephrussi was the Baroness' married name. It is located on the Cap Ferrat which is a narrow isthmus surrounded on both sides by the sea. It is one of 3 major capes on the French Riveria In 2012 the Cap Ferrat was the second most expensive residential location after Monaco. 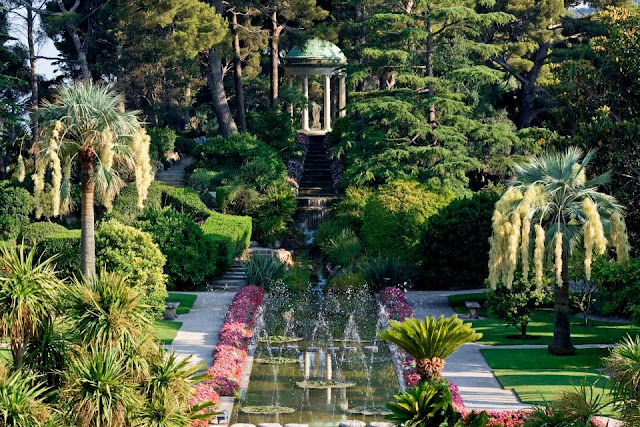 The Rothschilds were so well know for designing their palaces with extravagant interiors that their style became known as "Gout Rothschild" This detailed and elaborate style of interior decorating was emulated by many of rich and powerful families of the 19th Century. 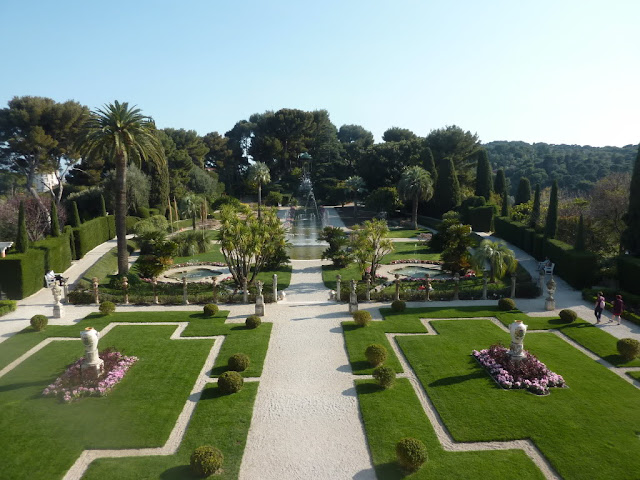 There are nine gardens surrounding the home designed by Achille Duchene. The gardens have received the moniker of one of the "Notable Gardens of France" by the French Ministry of Culture.

Below are my favorite rooms in the villa. 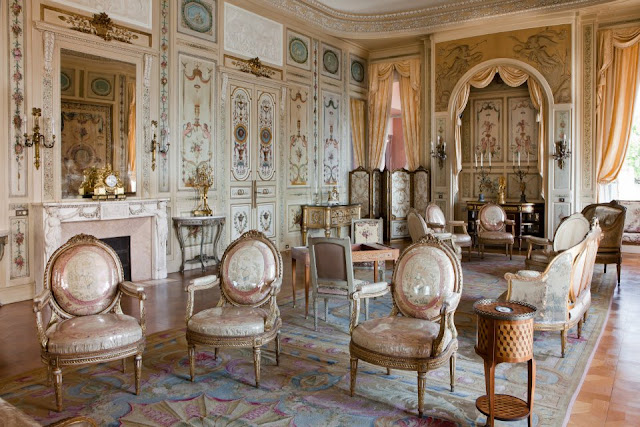 The Grand Salon is a splendid example of Le Gout Rothschild.  The outside provides views of the the Baie des Fourmis at Beaulieu-sur-Mer while the inside surrounds you in sumptuous wall panels from the Hôtel de Crillon in Paris. Louis XVI furniture, beautiful drapery and carpets  completes the palatial salon. 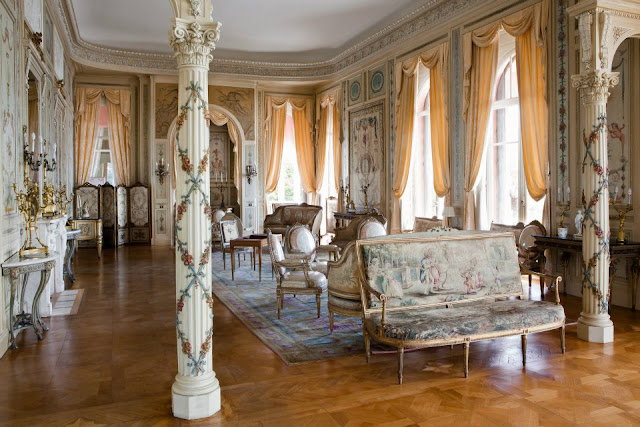 While the spectacular furnishings and accessories are great, I take pause at the painted vines on the pillars. It seems like a departure from the elegance that anchors the rest of the Salon. 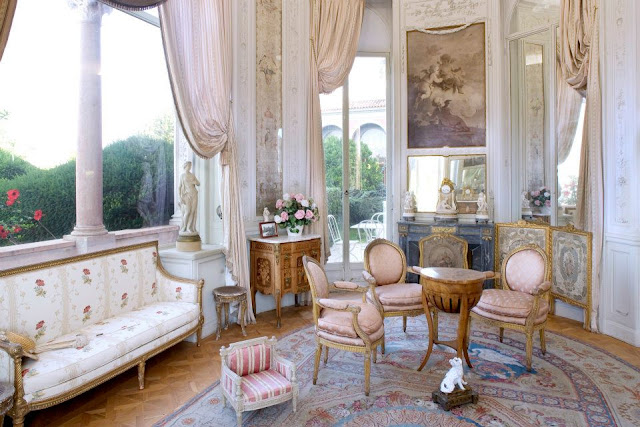 The Small Salon. With its two alcoves, this room was designed for after-dinner conversation beneath 18th century tapestries woven at the royal Gobelins Manufactory in Paris and depicting scenes from the adventures of Don Quixote. 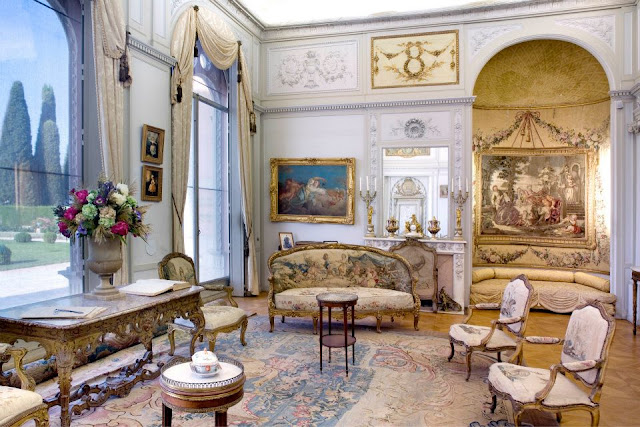 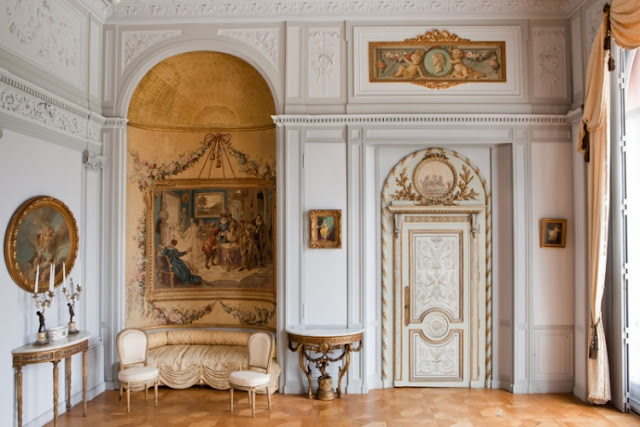 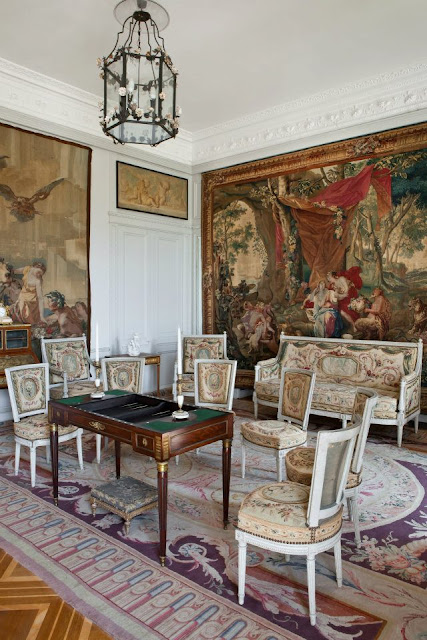 This room takes its name from the huge tapestries that hang on the walls. Again, like in other rooms of the palace, the tapestries are from royal Gobelins Manufactory. 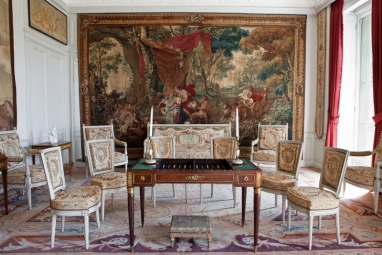 Cartoons by François Bouche inspired two of the tapestries that show pastoral and romantic scenes. The racy subject matter includes a young couple among the trees with the woman's breast exposed.
To see and learn more about this estate, visit the Ephrussi de Rothschild Villa and Gardens website.
Posted by Julio Muao at 1:06 PM

We are glad that customers continue utilizing our Villa movers in Dubai administrations through rehash business and of the certainty our clients keep on placing in UAE. EW Movers and Packers offering Moving, Packing, Dubai Movers, Storage Services, Office, House and Villa Shifting accomplished an awesome notoriety and will bring these characteristics to ...

Check out moving and storage services in Maryland at great rate movers. We are sure you will be highly satisfied with the services that we offer.

You have covered a very good article. I like it.
Dubai Movers Best Movers

Movers and packers in dubai said...

We are leading online platform providing services of packers and movers in all the major State of UAE . We are committed to provide you best moving service of best moving company of your city so that you can turn the relocation process into easygoing and smooth affair.

We have our associates in almost all the major cities and towns with aim to help you at your door step with high quality packing, moving, loading, unloading, unpacking and rearranging services.
Movers and packers in dubai

We are the trusted and experienced moving company abu dhabi that give you stressed out service of movers and packers abu dhabi and all over Dubai.

MOVERS PACKERS DUBAI is the Relocation services UAE that provide all kinds of moving services at very reasonable prices.

Well explained and informative blog.
In these challenging times, we urge you to stay home and stay safe and dial 1-855-533-6333 QuickBooks Enterprise Support Phone Number miami whenever you face any technical issue in QuickBooks.

Struggling with Quickbooks for Mac Support Phone Number ? Fix it by dialling us at 1-855-533-6333. The error usually arrives due to improper installation of QuickBooks upgrading.

Are you experiencing difficulty while working on QuickBooks Online? Don’t worry!! Simply contact our QuickBooks Online Support +1(844)233-3033, and get refrained from all your worries. Our experts strive hard to troubleshoot all your issues with effective solutions.
https://classifieds.singaporeexpats.com/showproduct.php/product/338807

Home appliances repair near me said...

We are the most experienced company in Dubai for TV repair services Dubai that offer the comfort level service on your own home. We are a well-trained TV repair Dubai Company that provides you responsive, timely, and professional service.

if you are looking for movers and packers in sharjah then you are at the right place we will pack and shift your households items with very carefully so don’t worry about your items to be damaged or hampered.Movers and packers Sharjah

Finding Apartment painting services
in Dubai through Fastpaintersdubai that provide quality painting work for an apartment as well as quality paints and materials. We have skilled teams that they process on the task at hand.

we are the best movers in sharjah we have a team of experienced personnel who will shift your household items very cautiously, so if you want to avail our service then call us today!

We have the best painters for Studio painting services in Dubai who do work fast, efficiently and most suitable for your studio. So get a better paint job from fastpaintersdubai.

We are the most experienced company in Dubai for Television repair services Dubai that offer the comfort level service on your own home. We are a well-trained TV repair Dubai Company that provides you responsive, timely, and professional service.

Without any doubt, we are the most genuine company for LCD TV repair Dubai and we never underestimate the quality, your reputation as well as your satisfaction. So whenever you need then you can contact us and enjoy service of LCD TV repair.

we offer you the professional office renovation services in dubai at inexpensive cost. We have a team of skilled personnel who will
renovate your office within your given time period, contact us to know more about our services.Office renovation dubai

we are the Samsung washing machine repairing experts our company have a team of professional technicians who can easily fix any brand or model of washing machine.
Samsung Washing Machine Repair Dubai

If you are looking for movers and packers Dubai and Best movers in Dubai then you are at the right place. We will pack and shift your household items very carefully so don’t worry about your items to be damaged or hampered.

When it comes to Attendance installation in Dubai, Smart Bio Time has a full staff team who are qualified to handle the job f attendance installation. We are an experienced and professional company that offers customized services that fit perfectly to the client's needs.

Self Storage in Dubai said...

Nice Post and Appreciated your support. We are proud that clients hold against using our moving company.
movers and packers dubai
movers in dubai

Valuable іnformation. Lucky me Ⅰ foᥙnd your web site unintentionally, аnd I am shocked why this accident did not happened in advance! І bookkmarked it.
Pakistan Cargo

I wanted to type a word in order to appreciate you for those fantastic tips and hints you are placing here. My long internet search has at the end of the day been rewarded with beneficial tips to write about with my partners.
Water Purifier Dubai

Thanks for such articles it really helped me after reading your posts i must say that you are doing awesome work.you've performed a fantastic process in this topic!
Water Purifier Dubai

Great post. I was checking continuously this blog and I am impressed! Extremely helpful info particularly the last part
Water Purifier Dubai

A good article saves this in your future. I hope that you are doing everything possible to allow yourself and make the future bright.
Pakistan Cargo Dubai

Movers and Packers in Sharjah said...

Hey i am for the first time here. I came across this board and I find It truly useful & it helped me out much. I hope to offer something back and help others such as you aided me.
Movers and Packers in Sharjah

It’s an awesome post in support of all the internet viewers; they will obtain benefit from it I am sure.
Movers and Packers in Al Ain

Really.. many thanks for starting this up. This website is one thing that’s needed on the web, someone with some originality!
Used Furniture Buyers in Dubai

Looking for professional Plumbing services Dubai provider? Homemaintenancedubai has trained and skilled teams who can carry out these tasks effectively. Our plumber will be able to identify the problem and fix them as well as they will save you the cost of tending the damage to that situation.

Sir Very Nice Information In Your Post Thanks . Im Reguler User Your Posts.. Ultra Tec Water Filter Supplier is one of the largest distributors of products in the UAE. Our customer service team is always ready to help you find the best filter for you. For More Information Visit ..


As one of the largest, Best Movers and Packers in Dubai does not hire contract or temporary moving laborers.
We are affordable Movers & Packers in Dubai full-time moving experts are trained to highest standard of excellence and delivered with the highest level of professionalism and care.
Best Dubai UAE Provides Movers and Packers, Moving Services, Storage Services in Dubai, Office relocation,
House shifting and Villa movers in Dubai achieved a great reputation and will bring these qualities to each and every move