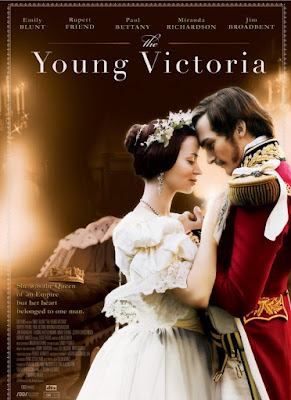 Scheduled for U.S. release in November 2009, The Young Victoria is an epic movie that chronicles Queen Victoria of England's early rise to power, focusing on the romantic courtship and her legendary marriage to Prince Albert. Emily Blunt plays the young Victoria with Rupert Friend as Albert of Saxe-Coburg-Gotha. Miranda Richardson plays Victoria's over protecting mother. Jim Broadbent handles the role of Victoria's uncle, King William.

The film begins in 1836, the year before Victoria ascended the throne. She became the queen when she was 18 years old. With grand palaces and lavish ball scenes, the film promises a visual feast.
Critics of the movie have varying takes on the film but seem generally pleased. The Nutshell Review indicated that the movie is gorgeous but lightweight and left the viewer wanting more.

Kate Coffey, from Tiscali Entertainment, felt the movie is charming but meanders. She effusively described Emily Blunt's performance as grand and she gave the film a thumbs up for historically accuracy. She opined that its accuracy could be credited to the fact that the Duchess of York, Sarah "Fergie" Ferguson, is a co-producer.
European critic Andrew Robinson, from Eye For Film, disagreed because he felt the movie took liberties with historical facts but he excused this transgression by recognizing that the film is a dramatization and not biopic.

However, he did agree that it is a likeable and enjoyable film. He was particularly pleased with the performance of Jim Broadbent. I can't wait for the opportunity to see it myself so I can form my own opinion.
Alexandrina Victoria
(May 24, 1819-January 22, 1901) 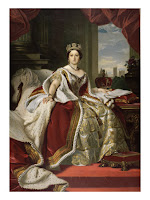 (from wikipedia)Victoria's reign as the Queen lasted 63 years and 7 months, longer than that of any other British monarch before or since. She is to date the longest reigned female monarch in history. The period centered on her reign is known as the Victorian era, a time of industrial, political, scientific and military progress within the United Kingdom.

Though Victoria ascended the throne at a time when the United Kingdom was already an established constitutional monarchy in which the king or queen held few political powers and exercised influence by the prime minister's advice, she still served as a very important symbolic figure of her time. Victoria's reign was marked by a great expansion of the British Empire; during this period it reached its zenith, becoming the foremost global power of the time.

Victoria, who was of almost entirely German descent, was the daughter of Prince Edward Augustus, Duke of Kent and Princess Victoria of Saxe-Coburg-Saalfeld, and granddaughter of George III and the niece of her predecessor William IV. She arranged marriages for her nine children and forty-two grandchildren across the continent, tying Europe together and earning her the nickname "the grandmother of Europe".[1] She was the last British monarch of the House of Hanover; her son King Edward VII belonged to the House of Saxe-Coburg and Gotha.

Hi Julio, Hope this finds you folks well and your little one thriving! Thanks for your nice comments on my blog lately! I don't feel to bad for turning the big 50.
Ooooo, I am going to love this movie I think. I love period films; the history, the costumes, the settings and all. I really love the English ones since I was born in England. And Victorian is a favorite period of time of mine.
I have been watching the Tudors series and though racey in places, I like it. Good acting!
Thanks for the heads up about this!
Enjoy your Sunday!
Blessings,
Linda Q

Hello, Julio. Thank you for bringing the film to your readers' attention. I generally enjoy period films very much. Like Linda Q., I'm mad about The Tudors.

I appreciated the visit and the thoughtful comment you left. I haven't developed the craigslist habit, but I've definitely done my share of eBaying! Hope your week goes well.

Susan (Between Naps On The Porch.net) said...

Hi Julio, This sounds like it's going to be a good movie. I love this type...if for no other reason than drooling over the costumes and the scenery. :-) Thanks for sharing all this great info and background. Can you just imagine having to rule a country at the age of 18??? I would have been terrified! 63 years is amazing...especially back then when folks didn't always live to be so old. Wonder how long Queen Elizabeth has ruled and if she'll break Queen Victoria's record...can't remember how old she was when she began. Poor Charles...he'll never be King. :-)
Susan