DISH NIGHT AT THE MOVIE THEATERS 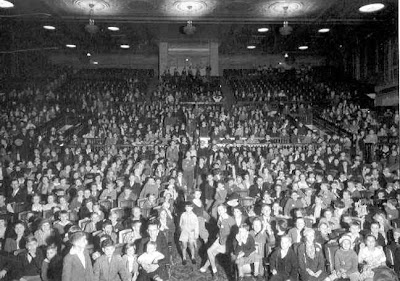 Earlier this week while deciding on a table setting for a luncheon I hosted, I remembered a fascinating conversation I had with my partner Dan's parents regarding tableware during the 1930's depression era . They spoke about how anxious movie-goers stood in long lines at the Lyceum Theater in New York City on West 45TH Street not only to see the featured show, but to also receive a complimentary tableware which was part of a collection the theater had been giving away to movie goers each week. The promotion? Dish Night.
The recent onslaught of tableware manufacturers, like Royal Doulton, Lennox and Waterford, closing shop due to dramatic decreases in sales and profits which economists attributes to the current and ongoing crisis that our global economy is experiencing made me take notice of the similar parallels from the 1930's to today's situation. This left me wondering if history could be on the verge of possibly repeating itself by re-introducing Dish Night? 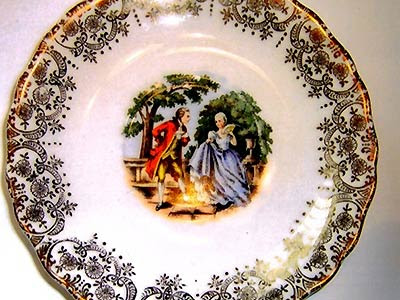 In the 1930s when the country suffered the great depression, many Americans were forced to drastically cut back on things that were considered more of a luxury item. Among the many items were tableware and attendance at the movie theaters. 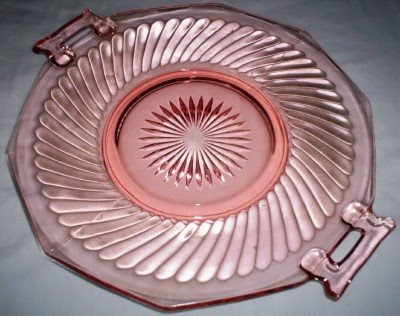 For many Americans, dining was considered an integral part of family recreation. Suffering industries whose business relied on tableware understood that. As an incentive to enticing young women and housewives (who were the target market) to the movies, theater owners along with the cooperation of American pottery manufacturers, Salem China company, Homer Laughlin China company and the American glass industries(depression glass)partnered in a joint venture and created "Dish Night". 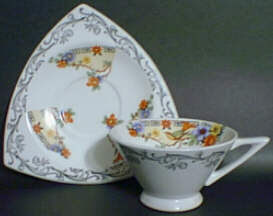 Dish night offered movie goers a complimentary piece of dinnerware such as a dinner plate one week, a matching soup bowl the next and so on. The goal was to entice the movie goer to attend weekly to collect an entire set of the china. Although, Depression glass was also included in the movie theater give-aways, that was mostly distributed by food manufacturers namely Quaker Oats Company at grocery stores and even retailers such as the 5 and 10 cent stores. 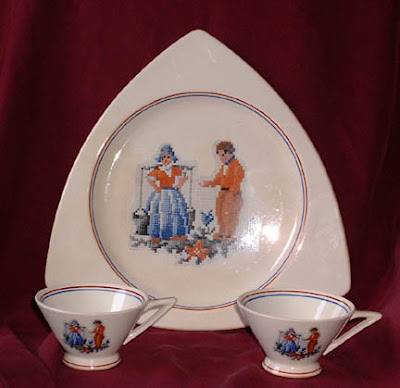 The goal was two fold. One, to offer struggling Americans tableware for their homes in an economy where most were relegated to drinking out of old pickle jars and tin plates. Second, was to help save the jobs of pottery factory workers by allowing the industry to sell their wares to the theaters which kept their doors open during the depression. 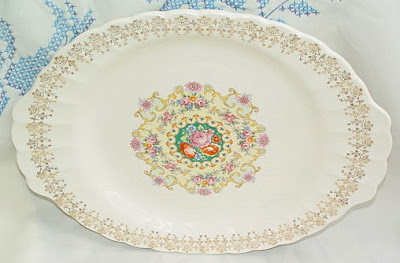 Sebring Pottery also employed its staff during the downturn by supplying dishes to meet the demand of the movie houses. In addition to attracting women to the theater under the guise of beautifying their homes with china, some theaters had Bank Night where a monetary prize would be given to the lucky ticket holder. The catch was the winner had to make it on stage to claim the prize in 60 seconds! If a prize was not successfully claimed, it went into the pot toward the next Bank Night prize. Unfortunately, the Bank Night became chaotic and in some towns violent. 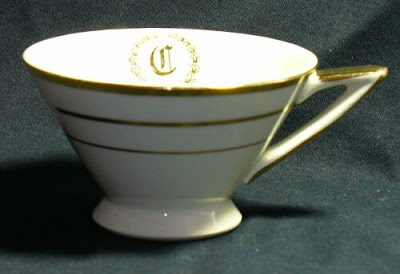 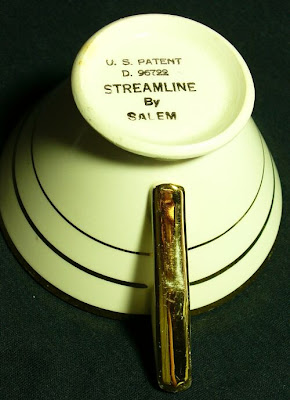 The dish makers seized on this and heavily promoted Dish Night to the theaters by stating women who go home with dishes are much happier than movie goers leaving empty handed after Bank Night. Alas, they underestimate the wrath of a woman scorned. In one theater, a shipping debacle resulted in the successive repeat giveaway of gravy boats. On the fifth gravy boat giveaway, the women revolted! They threw gravy boats at the theater owner in protest. 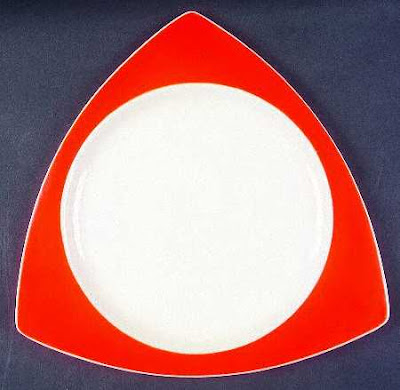 What a great post, I learned a few things, so interesting!
I remember getting those ruby bubble glasses of the 60's with green stamps at the gas station. Sort of simular.
Hey Julio, thanks for stopping in my blog. Glad I could give you a big smile! And you gave me one also, much needed for me this week, so I appreciate it.
You and yours have a wonderful Valentines weekend! Do something romantic!
Linda Q
Queen of my own castle at least!lol

This is new to me. Thanks for the information

Susan (Between Naps On The Porch.net) said...

This is facinating...I'd never heard of "dish night" at the movies. This girl would have been in attendance every week! Ok, confession time. I collected all my Churchhill Blue Willow shopping at Publix. I bought a LOT of groceries but I managed to get all the pieces I wanted for 12 place settings. :-) Thanks for sharing this interesting pieces of history! I love the Marigold china!!! Susan

This was great.I always wondered about depression glass.Thank you for the lesson...Ann

I remember when we used to get beautiful cut glass cereal size bowls or cups out of oatmeal boxes and washcloths or thin dish towels out of washing powders! As kids, we loved to see what would be in the next box! Wish I had some of that stuff now. I'm 71 and it would be fun to have them! Love you blog and pictures!

I have a set of "Dish Night" glassware and have no idea is there is a market for such things. My Mom and Grandmother got them in the 1940s in Detroit. I was born in 1945 and vagely remember go to the "show" on dish night. Kathie

@kathie, I also have a set of dishes that are from a detroit theater's dish night. Do you just have glassware or china as well? I have many pieces of my great grandmothers smith taylor and smith movie dishes, but have yet to find the name for the pattern.
Sarah

Thank you for that post, I have a whole set of dinnerware with a real gold pattern that my Mother collected at her favorite theater back in the 30's and 40's in Brooklyn, NY (maybe she went into the city too, not sure) But, I have often wondered about the set, they have no markings on the bottom?
Christine

My mother collected a pink set of dinnerware with what looked like a pine cone pattern, from the Avenue Movie Theater in Philadelphia, PA during the 1950s. I have seen a pattern similar from Canonsburg Pottery but the dinnerware itself is white and the pattern is called clover. If anyone knows any info on this pottery, please leave a post. As to the other posts, many patterns can be found at replacements.com.

I have several items my mother collected at movie theaters in Lawrence, MA. How do I learn more about their value?

I have a set of Dishes I inherited from my grandmother, that I am told was from movie theater "dish night" promotions. How can I find out more information about these dishes?

I also have movie dishes. My grandmother got them from a theater in the Bronx. I have done hours of research on the Internet and cannot find anything about them except that I am not alone. Mine are marked "Made in Sebring USA Warranted 22k gold". When I get to the Sebring website these dishes are not even mentioned let alone photographed. They are blue rimmed with gold trim and a white center with a cottage scene in the center. Any help anyone?

I was wondering what the dish name is called in the photograph above, that you have named marigold pattern, homer laughlin; It's like a Marie Antoinette like illustration. I too have a set of bowls with this same pattern I got from my grandma. Do you know any history behind these? Thanks so much!

That gravy boat business...you mean that story from Jean Shepherd's "In God We Trust, All Others Pay Cash" was based on a true story?!

That was one of the stories in that book that didn't make it into the movie A Christmas Story.

I too had a set of movie dishes. I purchased them from a woman who told me the story of how they were collected. had all the service pieces also. they were yellow, squared off, cottage scene with bluebirds. would love some id on them. I no longer have them but would love to own one piece.

I have a Beaux Mondes Marigold platter that is pictured on this site. It was broken by the movers in my move. I am trying to find a value for this to give them for replacement. Can anyone help?

I am trying to figure out what kind of dishes were given out at Sacramento theaters during the30s and early 40s. My mother was trying describe it to me and I would like to get a few pieces to serve some items on her 85th birthday. She only remembered that there was green on them, possibly flowers.
I suspect the Salem company, but i am certain they were round and not the triangular dishes I have seen.
I appreciated this blond would love any help.
Take care
Tyla
Sacramento, CA

To jonesgirl: I also have a set of yellow dish ware w/a cottage scene of a window w/bluebirld and a blue vase. Flowers twining around the window. Did you ever find any more info?

I was given a "set" of blue, green, yellow and orange dishes by a man in Chester, California. He said they had been given away at movie theaters during the depression.
I have not been able to find any further information about these. They are very bright and simple and square with scalloped corners. Some are chipped and I would love to replace them. Have not seen them on any of the websites. The are thinner than the Bauer ware and Fiesta ware.
Does anyone have any information which would help?
Thanks,
Ada

I don't see a way to respond to you directly, but it sounds like your dishes may be either Leigh Potters' Leigh Ware on their Ultra shape or Crescent China's Sienna Ware...google them and let me know; a friend is an expert in those lines.

I have my grandmothers movie dishes. They have pink flowers on a white background. I have a service for 12 plus the serving pieces. I love it and the story

All my husbands aunts grandmother and mother collected movie theatre dish giveaways. I was able to give my daughter in law a complete service for 8 plus serving pieces and two of my granddaughters the same. We just recently found two more boxes of these dishes in a storage
facility my M I L had. Anxious to see how many more sets I can make to sell.